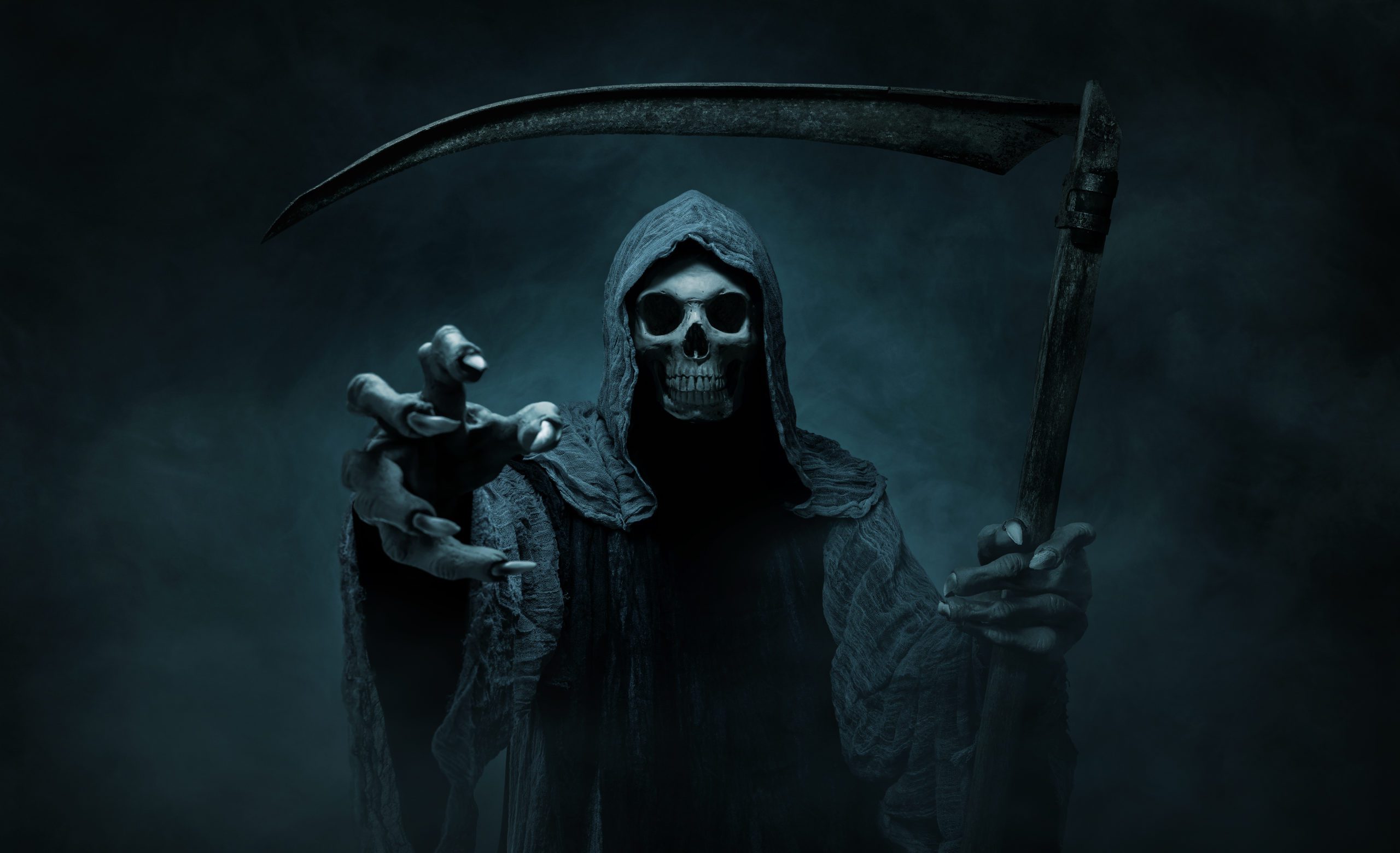 “Death replied, ‘Bitch, it ain’t that easy,’ and he swept in my house uninvited and took a seat on my sofa.”

For several nights in a row, I had heard knocking coming from somewhere deep inside my house. I could never quite locate the source of it. Maybe it’s over here near the front door? No. Maybe it’s something in the walls? The garage? Outside? No.

He came rapping, gently rapping, at my chamber door, and I said, “No thanks, Death, not today.”

Death replied, “Bitch, it ain’t that easy,” and he swept in my house uninvited and took a seat on my sofa.

Sometimes Death recalls his manners. He’ll sip his tea with his pinkie out and pat you on the shoulder, murmuring, “There, there,” while casually remarking on your fine china cups and impressive selection of teas.

Sometimes he is terrifying, screaming in your face as he rakes his claws across your belly and throat.

That night Death came running in on light feet; he sat on my sofa and requested tea, and then he threw it in my face. He said nothing, but sat there, secure in his purpose and function. How I hated him in that moment. I knew he would not perform without my participation, and this is why I hated him so much. I knew I was to become Death. He traded his scythe for my reluctance and said, “Handle it, bitch.”

In the midst of a conversation about Death, that unavoidable fucker, I recently remarked to a friend, “You don’t celebrate enough.” Later I thought, as I wept and moaned and whooped and hollered about the many changes in my life, why don’t you take your own goddamn advice and celebrate?

Celebrate Death. Celebrate the bone and sinew of change. Endings feed beginnings. Take a seat at the table.

The World card in the tarot is both life and death; the ending feeds into a beginning, and the beginning feeds into another ending. Yes, the Lion King had it right from jump. There is a circle of life, and it is constantly moving. Death and rebirth share the same breath. Something ends, and another thing starts—all within the space between inhale and exhale.

Attachment is a motherfucker. We get fixed ideas; we are susceptible to the illusion that things are permanent. When we believe that, the ending becomes painful.

We get out of step with the Universe. Grief may come, and sadness may follow, holding grief’s hand and whispering sweetly in your ear. The tears fall and the pain comes, sharp and shocking, or in melancholy waves.

I had forgotten something I learned a long time ago. Pain is caused by attachment. Grief is caused by the illusion we have lost something. The truth is, you will always keep what you had. But the bigger truth is you really never had anything because nothing is ever stationary. Everything is always evolving and moving, ending and beginning.

Death will always come with new life, and this is something to celebrate.
So while that fucker is perched on my sofa, contemplating whether or not to throw his tea in my face again (he will), I’m going to pour myself a nice cold glass of Veuve. To paraphrase a comedic genius, life’s a celebration, bitches.

We’ve welcomed Death in our house; we’ve taken the scythe and culled the dead energy. We’ve shared resentment and tea with him. Now what?

He usually leaves as he came, rudely or calmly. Sometimes he leaves abruptly; at other times, he lingers with long good-byes that start to feel uncomfortable, and you are left with the debris of deformation and collapse. The house is a mess, and your mascara is running. Do we clean things up? Do we burn it all down? Do we settle in with sisters Grief and Sadness?

Things unwind themselves if you don’t hold on too hard, and you are left with seedlings. Death leaves us with fecund earth, and here we are again. It is inevitable. It cannot be stopped. Yes, Jeff Goldblum, much like the Lion King, had it right all along. Life finds a way. Always.

The Universe says no thank you to open space, blankness, and nothing. The Universe says, almost immediately on the arrival of Death, “Here are the seeds of this new thing! You’ll love it. I planned them especially for you. Have fun.”

Why? Because life is an unrelenting ho.

When things are stagnating and no longer working, there is something around the corner waiting for you. Life finds a way.

In the midst of death, sometimes we need to remind ourselves that in death we are simultaneously experiencing birth. Life doesn’t stop. Life wants to upgrade you all day, every day, and this is truth. So when Death sweeps through, knocking over champagne glasses and tossing the wedding china on the floor, remember when he’s gone to look for the seedlings he’s left behind; they’re yours, and you can grow a whole garden if you want.