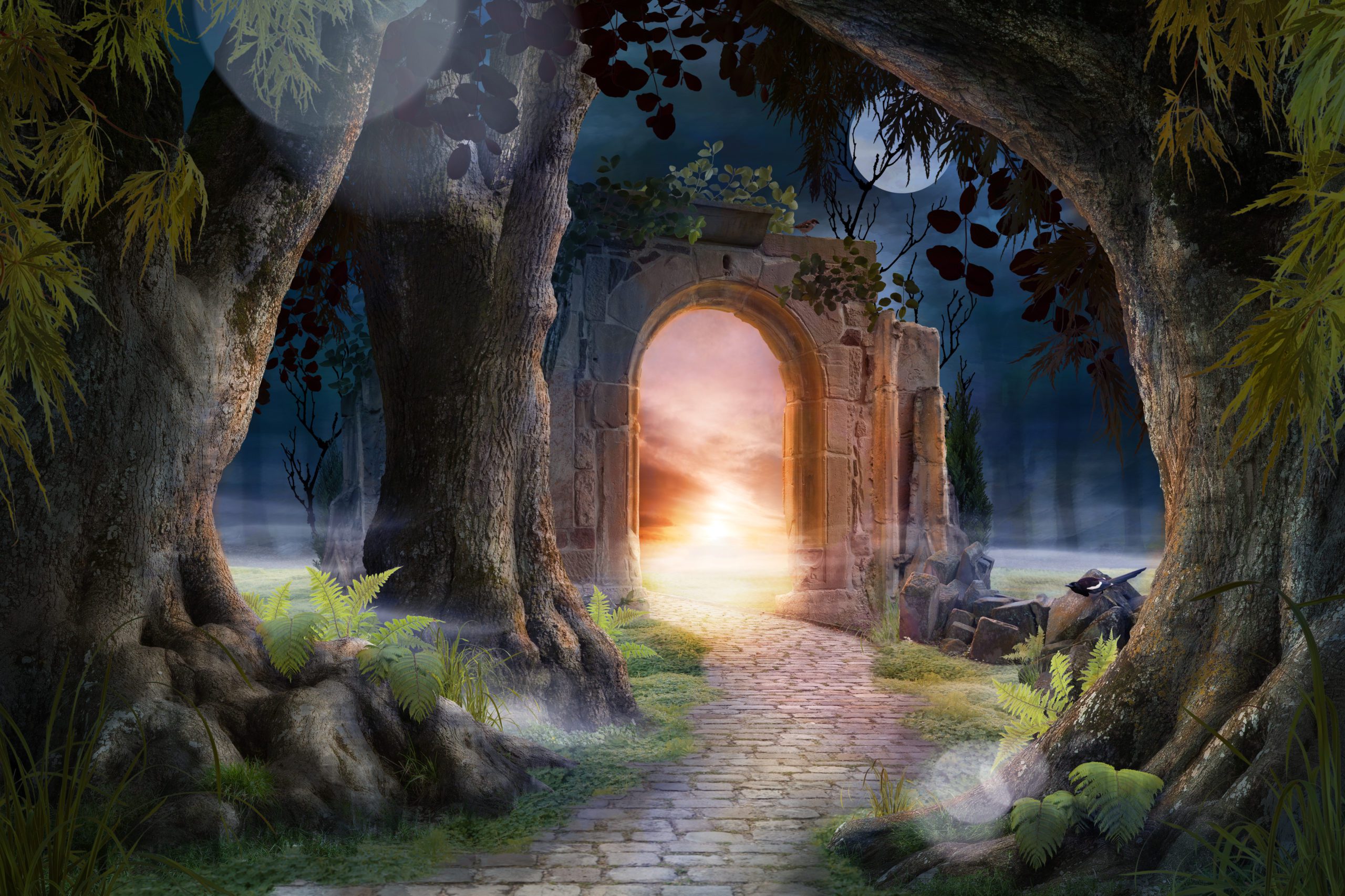 Is Tinkerbell Real? by Kirsten Langston

“Maybe—just maybe—what these people are seeing is evidence of one dimension bleeding into another, allowing for inter-dimensional communication.”

When I was a little girl, my mother drove my sister and me down First Street, and we passed close to the bay. There was a driving rain; you could barely see anything. I looked out on the water as I always did. It was gray and choppy. The rain was coming down in thick sheets; you could barely see the hills on the other side of the bay. But what I did see, shocked me.

There were two little men in a little boat. These men were wearing incredibly strange, bright-colored clothes. One had striped stockings peeking out of blue pants that were an odd length. The other man had overalls and a straw hat on. Their faces, from what little I could make out, were peculiar. They had small, thin lips and bright red beards. Both men had ruddy faces and red-tipped noses. They looked like something out of a movie.

They were moving fast, trying to get the little boat to shore. They seemed to be moving faster than a human could move. One man seemed to be yelling at the other. Everything about them suggested to me that they were some kind of leprechaun. They were too small, too fast, and looked too odd to be human. I glanced over at my mother; she didn’t notice them. When I looked back, they were gone.

She knew exactly what I was talking about. “I thought I was the only one who saw them! You saw them too?”

Many People Claim to See Fairies

What did we see? Were they leprechauns? Little people? An optical illusion brought on by the waves and the rain? Whatever we saw, it seemed special, and I’ve never seen anything like it again.

Do fairies actually exist? See also: faeries, fae, and fay. Are these all the same things, and are they real? I have a hard time with this one, despite my strange experience as a child. Some people have sworn up and down they have actually seen fairies and even spoken with them.

I’ve been reading fairy forums (yes, really, I have), and most of these people seem very sincere. Many of the stories recount childhood memories. The stories go like this: “As a child something occurred, and then I saw blah, blah, blah… I’m pretty sure they were fairies.”

Some of the stories are by adults who have seen something that they cannot identify, and they wonder, “Did I really just see a fairy?” For example, people report lights have followed them through the woods, or they saw something flying that was too big to be a bug but too small to be a bird. Most of these encounters take place outside in gardens or the woods. A staggering amount of them take place in the UK, which is not surprising considering that is where the fairy myth really took root.

So assuming these people are not trolling us and at least half of them are sincere adults, what are they seeing? And where does it fall in the realm of the psychic? Does it fall into that realm, or should it be categorized with aliens, angels, and demons?

I’ve found that a lot of people believe in all sorts of paranormal phenomena and fantastical beings. If they believe one thing, they tend to believe it all. If you believe in psychic energy, why not ghosts? Why not angels? Why not fairies? I think the acceptance of so many unsubstantiated beliefs damages the psychic community. When people are quick to believe in all things, it immediately discredits phenomena that might actually be legitimate.

In my personal opinion, psychic phenomena, ghosts, and even messages from the other side are energetic and dimensional situations. Physics proves these things are possible. Fairies? Not so much, unless of course, you believe fairies are from another dimension. I might buy that.

Fairy Myths around the World

From my research on the internet, it looks like almost every culture, going back to the ancients, had some kind of fairy myth. Usually, fairies were considered spiritual beings who were either naughty or nice and needed appeasing. Sometimes they could be presented as mean; in some cultures, they were described as evil. Some thought that seeing a certain kind of fairy could be a harbinger of doom. They were portrayed as varying in height from feet to inches and believed to enjoy dancing, laughing, making mischief, and making merry.

The most common idea of fairies comes from Celtic myths, which appear to be the most prevalent today. According to the website, timelessmyths.com, there are several different types of mythological fairies: banshee, baobhan sith, beane nighe, brownie, changeling, dullahan, elf, amanda, goblin, korrigan, leprechaun, and pooka.

Yes, these are all considered to be fairies and none of them are described as little winged female creatures that hang out in the backyard, eating daisies and whispering in your ear. Wings, in fact, only became popular in the Victorian era. Until then, fairies were assumed to be humanoid in appearance.

So we see that fairies (fay, fae, and faeries are different names for the same thing) are borne of ancient myth. This does not make them real. There is no scientific evidence of fairies. I believe people are seeing something, but I do not believe they are seeing fairies.

Now, one theory that seems slightly plausible is inter-dimensional contact. Physics tells us there has to be many dimensions. String theory, which is what scientists are using as the basis to create the Theory of Everything (Yes, Stephen Hawking), states there has to be at least ten dimensions.

The fifth dimension and beyond is where we might see the creation of other worlds and the existence of other creatures. Maybe—just maybe—what these people are seeing is evidence of one dimension bleeding into another, allowing for inter-dimensional communication. This could be a brief schism in the space-time fabric that allows them to glimpse something from another world. Perhaps this has always happened since the beginning of time, and this is where these myths come from.

While this is just food for thought, for now, I say nope. Sorry, fairies do not exist beyond the imagination.

Potential Ways to Attract Fairies and Signs of Their Presence

But if you want to prove me wrong, here are the best ways to meet a fairy, according to the internet:

1. Spend time in nature.
2. Play a flute beneath a tree (No, really, several sites suggest this.).
3. Go out in your garden and sing.
4. Go to heavily wood areas, sit beneath a tree, and wait.

Here are the signs that you are in the presence of the fae, according to the internet:

1. Unexplained movement in the grass.
2. Movement in trees or bushes that cannot be explained.
3. Small items being moved or stolen from your home.
4. Getting the chills.
5. Loss of time. (This is also a sign of mental or physical illness.)

So what are you waiting for? Go grab your flute, and wait for the bushes to start moving.